On Friday 16th November staff at TR Uckfield, HQ of TR Fastenings, the global engineer, distributor and manufacturer of industrial fasteners took part in this year’s Children in Need and raised a total of £93.35. With this contribution they are helping to change a child’s life for the better. 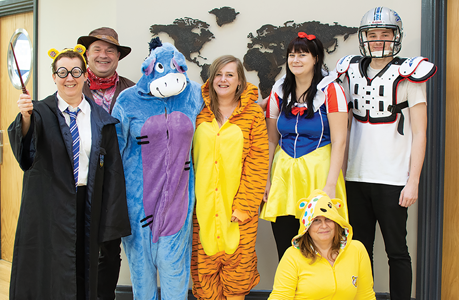 To raise funds this year, employees at BBP dressed up as various characters! A prize was awarded to Sylvia Millsom for her magical Pudsey take on Harry Potter. Everyone also had the chance to participate in TR’s game “Guess how many fasteners in the jar”.
Sylvia comments:
“I am delighted that the TR Uckfield team were able to dress up and donate to such a great charity, thank you to the staff for also voting me as the best dressed!”
Published 26.11.18

TR’s Bellbrook Park (BBP) in Uckfield and Waterside Park in the West Midlands have raised over £300 between them after taking part in a range of activities on Friday 17th November for the BBC’s Children in Need charity initiative.

Uckfield’s BBP employees took part in a raffle and the Children in Need duck race, which was broadcast live on the charity’s Facebook page on Friday. The winners of the raffle were Shirley Creasey, winning the round of golf for two people at the East Sussex National Hotel and Sian Whitlock, winning the champagne afternoon tea for four people at the Buxted Park Hotel.

The winner of the duck race was Justin Bennett, who backed the ‘Golden Duck’. Overall, the BBP team raised £159.65.
Staff at Waterside Park held a cake sale and had their faces painted, and raised £154.50 in total. Added to the BBP figure, this makes a total of £314.15 across the two sites.
Published 27.11.17

In order to raise money for the BBC’s annual ‘Children in Need’ fundraiser, staff at Uckfield’s BBP site will be participating in the charity’s national ‘duck race’ which will take place on social media at 1pm on 17th November. Employees will also hold a raffle in order to raise further funds.
The duck race will be aired live on the Children in Need Facebook page, and will see 20 toy duck characters, including ‘Tim Beake’, ‘Count Quackula’ and ‘Ducky McDuckface’ go head to head. Employees from across the country have been encouraged to pick a duck for £2 in a sweepstake style competition, before tuning in to see how their chosen racer fares on the big day.
The BBC’s fundraising pack comes complete with top trump style scores out of ten for each duck, for Agility, Speed and Experience. After watching the race at 1pm, the person who has picked the winning duck will receive a prize. All the money collected will go to Children in Need.
Staff can also buy raffle tickets at 50p each, to be in with a chance of winning one of the following fantastic prizes:
For more information or to request a press pack, contact TR Marketing: marketing@trfastenings.com