TR’s European Health, Safety and Environmental Manager Jenni Morland and Sales Coordinator Katie Boddy, who are both based at the Newton Aycliffe site, are taking on the Northumberland coast for the Macmillan Mighty Hike in July.
This will be the second time for Jenni and the first time for Katie taking part in the 26 mile challenge which starts at Alnwick and ends at Bamburgh castle. Jenni, Katie and friends are doing the walk to raise money for cancer charity Macmillan in memory of their friend and colleague Linda Woodward. 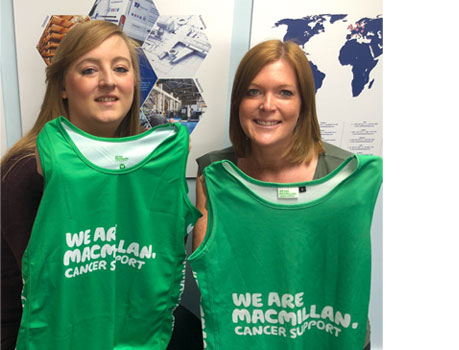 If you wish to donate, please visit the Justgiving page.

Thank you in advance for your support.
Published 30.05.19

TR’s Jenni Morland, European Health, Safety and Environmental Manager has completed the Mighty Hike, an astonishing 26 mile course that took 8hrs 34 minutes and raised a fantastic £1,400 for Macmillan Cancer Support.
The route started at 9:30am from the grounds of Alnwick Castle in Northumberland, and after a “Zumba inspired warm up session” Jenni and her group began their incredible trek in the 27 degrees heat. Walking six miles out towards the coast, and then following the coastline for a further 20 miles through Craster, Embleton and Seahouses, the hike ended at Bamburgh, home to the former Kings of Northumbria.
The unexpected heat forced several hikers to drop out during the day due to blisters and heat exhaustion but, according to Jenni, “the atmosphere was brilliant, with walkers and Macmillan team supporting those who were struggling to get over the finish line”.
Astoundingly, Jenni kept going even though she had suffered a damaged ligament in her ankle during the 24th mile. “I had to strap it up tightly and limp the last two miles – but it was absolutely worth the pain.”
It was an emotional day for all involved, as many of those taking part had personal reasons for raising money for Macmillan, but Jenni has already signed up for next year, convincing a colleague from TR’s North East office to join her as well.
Geoff Budd, TR’s European Managing Director, commented: “Jenni has completed an incredible feat in support a worthy cause. Her drive to finish the course, even after sustaining an injury, makes us proud to call her one of our own.”
Published 30.08.18

TR’s Jenni Morland, European Health, Safety and Environmental Manager who is based at the Newton Aycliffe site, is taking on the Northumberland coast in July for a charity hike.
The Macmillan ‘Mighty Hike’ will see participants including Jenni and a friend walk for 26 miles (a marathon distance) along the beautiful Northumberland coastline on 21st July 2018 in aid of the cancer support charity Macmillan.
The hike will start at Alnwick Castle, the setting for some of the Harry Potter films, and will finish at Bamburgh, taking in breath-taking coastal views along the way. Hikers will receive free drinks and snacks during the hike and a well-deserved free buffet lunch and hot food when they finish.
Jenni is walking in memory of Linda Woodward, her late colleague from TR at Newton Aycliffe, as well as another of her friends.

If anyone wishes to donate to Jenni’s fundraising, they can donate via her Justgiving page.