The following is an excerpt from the WEG website:

"The big question was, would the second phase of ticketing, that was opened yesterday to the general public on the Games’ website, experience the same success as that recorded during the first phase*? The answer wasn’t long in coming: in less than 24 hours, half the proposed passes (15,000 passes) have been reserved by Internet users, from Normandy, the whole of France, as well as overseas. In total, over 15,000 places were purchased in a matter of hours, enabling the organisers to exceed the target of 150,000 TICKETS SOLD.
At 2pm on Monday, the official website recorded 2,000 simultaneous connections, over double the normal visitors.  Ahead of such a success, the organisers are already considering extending their offer, so as to be able to meet demand. 200,000 places will remain allocated for the third and final stage of the ticketing operation, where the tickets will be sold individually. This third phase will start in March 2014."

It was a year ago this week that negotiations for me to buy Rhapsody were finally concluded and he was transported back down to Surrey for the next phase of our journey together.  The 2014 World Equestrian Games in Normandy!

Rhapsody has changed quite a bit in that time - with the continued support of Andrew Murphy his training has continued along the path that we began last year before London and he has muscled up quite a bit. The results of that are:  he is finding the work easier now that he is stronger – but his saddle no longer fits him!  Cue a call out to saddler Ellie Martin from The Bespoke Saddle Company… she has taken the saddle to make some alterations to give him more room to grow with no restrictions but ultimately it may mean more drastic measures. Its a fantastic saddle so I hope she can work some magic!

We have not been out to any competitions recently – instead spending the weekends while Andrew was away teaching in the States  going to a friend’s yard to make use of her 20 x 60 school with mirrors to focus on our weaknesses. Mostly this has involved my own position.   I have been concentrating on my own fitness too – pilates classes take place in the sports hall at work and so there is really no excuse. The exercises have pinpointed some interesting aspects of my 'one sided-ness' - apart from the obvious ones,  and have spurred me on to deal with these issues -  work in progress! Its a difficult time of year with the daylight hours getting shorter and shorter.
Having a 9-5 job this has meant initially totally changing our routine from riding in the evenings to riding before work which has worked well for the past couple of weeks but sunrise is getting later and later… so we will do our best till the tables turn again on the 21st  December!  Before then Rhaps has a date with Andrew… fingers crossed complete with a well fitting saddle!

Lee Frawley & Rhapsody - Since the Paralympics 2012

TR Fastenings were proud sponsors of Lee and Rhapsody during the Paralympics 2012, see what has been happening since and the lead up to the next big competition, the World Equestrian Games next August/September in Normandy, France!

"On the training front, Rhapsody has been going to Andrew Murphy’s yard in Kent for a week at a time every 4/6 weeks and this has proved to be an extremely valuable regime. It has given Andrew periods of concentrated time to really push the training forward. With my work constraints I am usually limited to riding with Andrew at the weekends either side of Rhaps’ stay but am getting the benefit of his continuing improvement nonetheless."
"We did however compete in July in the 3* CPEDI at Hartpury Festival of Dressage, being the only international for us this year and I was thrilled with Rhaps’ performance being placed 6th the first day with a very solid percentage. Once again GB were using the competition as selection trials for the Europeans and other nations had riders there for either a European Championship warm up or to try for a qualifying percentage for WEG next year. Rhaps was a bit unsettled on the second day – teaching me some important lessons for future warm ups and we dropped to 7th but were pleased to make it through to the final day’s freestyle when we came 5th, showcasing a new ‘dance routine’ to different music which the judges enjoyed.""Competitions have been kept to a minimum, partly to allow our training to progress and partly due to finances. A few unaffiliated local dressage competitions have kept my eye in and I was thrilled to win at Hickstead first time out since London last year!" 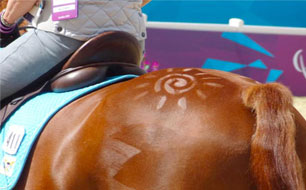 "At the end of August we had a weekend of competitions at Hickstead. Firstly a couple of para qualifiers for next April where Rhaps and I came 1st and 2nd – very pleased with that result but especially at how much progress he has made – which I featured on his Facebook page (USVI Rhapsody’s Road to WEG) – demonstrating the difference a year can make! The next day we headed back down to Hickstead for their unaffiliated championship, having qualified at our single appearance earlier in the year. We were in the lead till the last horse and so had to settle for Reserve Champion – can’t complain about that – and Rhaps now has a lovely Dressage at Hickstead rug.""I have also had the pleasure of a couple of extra-curricular activities recently. I was asked to give a presentation/slide show in aid of a riding for the disabled centre in Leybourne, Kent which was attended by the
local press and very well received – the Q&A session at the end demonstrated everyone’s continuing interest in London 2012. Closer to home I was flattered to be asked, along with fellow Paralympic equestrian Laurentia Tan who competes for Singapore, to present the Duke of Edinburg awards at the local Royal Albert & Alexandra School – and another group were treated to my slideshow ‘Behind the Scenes in London’.""Our target remains the same… the World Equestrian Games next August/September in Normandy, France! On the face of it Rhapsody and I have already qualified, getting the required percentages both in London and at Hartpury, but not wanting another last minute bombshell, the Virgin Islands Equestrian Association and I continue to keep a keen eye on FEI updates. Regine Fitzner from the VI is planning to go to their annual General Assembly in November in Montreux, Switzerland to get the latest news on WEG. Andrew and I sat down with our diaries recently to plan backwards – it is less than a year to go now and it really doesn’t feel that long away!"
"So…  just a little snapshot of what we have been up to – I will try and make these updates part of my routine in future.
Thank you, Lee."

Lee and Rhapsody evented on Sunday 2nd Sept and Tuesday 4th Sept in the dressage test and then the free-style event to which Lee performed to steel brass band music.

Lee commented after the events, "We have had a great time - a wonderful experience espeically the privledge of riding in that amazing arena with the London skyline as our backdrop!!  TR Fastenings would like to offer our massive congratulations - well done Lee and Rhapsody! "

TR employees Abi Burnett and Gill and Stephen O'Halloran, and Francesca Collin from Aneela Rose PR joined Lee and Rhapsody for a night of champagne and celebration in July.

Lovely food and a pre-event show from Lee and Rhapsody were a real treat and a great night was had by all. TR Fastenings are proud to be sponsoring Lee and Rhapsody and are looking forward to the big event starting on 29th August.

We are on the road to London 2012 Paralympics

Trifast PLC have come to my rescue in the form of further considerable sponsorship ticking the first 2 boxes on my wish list - now my ride on Pip through to the Paralympics is secure and I can not only continue with my training but increase it - thanks to their offer of a monthly training grant which will enable me to step up our program to include additional trainers and a fuller timetable.
For further updates and event news visit Lee's website: www.leefrawley.com
For more information or to request a press pack, contact TR Marketing: marketing@trfastenings.com