TR Fastenings is renewing its sponsorship of Mick Kirby, the Sussex-based clay pigeon shooting champion who has successfully competed in the sport across the globe since overcoming a stroke 12 years ago and subsequently having his left arm amputated in 2015.
Mick is a naturally left-handed shooter and, after the stroke paralysed his left arm, he retrained to shoot with his right arm in 2009, with help from disabled sports charity Sportability. Mick has taken part in both disabled and able-bodied shooting competitions across the UK and internationally with considerable success.

As well as competing, Mick is now established as a referee in the sport, for both able-bodied and disabled competitors. He refereed the British Open in 2018 and will be overseeing a number of events throughout the 2019 season.

In a break from the shooting, Mick undertook a different kind of challenge in September 2018, when he joined the Amputation Foundation charity for a trip to the Calvert Trust adventure centre in the Lake District. For over 40 years, the trust has run adventure and activity camps and holidays for disabled people and their families, offering visitors the chance to challenge their disabilities and take part in activities such as water sports, horse-riding, sailing and hand-biking.

Mick comments: “At the start of the trip, all of us were a little nervous and sceptical of how many of the activities we’d be able to do as amputees. By the end of a trip, wow, what a difference! Not only was I trying and excelling at things I never thought possible, I also met some friends for life. The whole experience was amazing and one I will never forget.”

It is with these new acquaintances and some other less abled friends that Mick is planning his next challenge: to climb Mt. Kilimanjaro in aid of the Amputation Foundation. He has already started training for the trip, which will take place from the 3rd -13th October this year.

In terms of shooting, Mick is competing in both down the line (DTL) and all around events throughout 2019, including the English and European Open championships.  Competing against able-bodied shooters, Mick’s aim is to get a medal in a mainstream competition.

TR’s support goes towards Mick’s training, equipment and travel expenses, in exchange for the company’s logo on his shooting jacket.

Abi Burnett, Head of Marketing at TR Fastenings, comments: “We’ve been proudly supporting Mick for years now and it’s amazing to have witnessed what he’s achieved. Constantly pushing himself to do more, Mick always excels in every challenge he takes on, so we are looking forward to witnessing more of his incredible achievements this year.”

TR Fastenings (TR) is proudly continuing its support of keen-eyed clay pigeon shooter Mick Kirby, who has achieved a personal best score in a national shooting competition, proving again that with perseverance and dedication, anything can be accomplished.
Mick, the Sussex-based shooter, has successfully competed in the sport at an international level after overcoming a stroke 11 years ago that left him disabled. The stroke paralysed his left arm, and being a left-handed shot, Mick had to retrain his skills from scratch.
Mick took part in a competition in Newcastle, where he competed in an incredible three events in three days, with the important English Open competition taking place on the final day. Mick enjoyed a storming success over the competition weekend and achieved two 3rd place awards at the event.
Mick is always striving to improve and his dedication is certainly paying off. He recently shot two new personal bests during a two day competition at Bisley, Surrey, achieving 88ex100 on the Saturday and 90ex100 on Sunday. He has improved to such an extent that now most of his competitors are able-bodied, proving that you can achieve anything you dedicate yourself to, regardless of the hurdles faced.
Geoff Budd, TR’s European Managing Director, commented: “Mick proves again and again that he is an amazing sportsman with unrivalled dedication to his craft. His personality and his drive to continually improve are qualities that we should all aspire to and we are proud to support him.”
Published 08.08.18

Global fasteners business TR Fastenings is pleased to be continuing its sponsorship of Mick Kirby, the Sussex-based clay pigeon shooting champion who has successfully competed in the sport across the globe since overcoming a stroke 11 years ago.

Mick, 58, is naturally left-handed, and after the stroke paralysed his left arm, he retrained to shoot with his right arm in 2009, with help from disabled sports charity Sportability. Mick has taken part in both disabled and able-bodied shooting competitions across the UK and internationally with considerable success, winning first, second and third places against able-bodied shots in Class C competitions.
For a number of reasons, Mick has been unable to shoot as much as he would have liked over the last four years and he suffered another setback in September 2017, when he broke his one ‘good’ arm. However, he has not let this deter his love for shooting and is now fully back in action. He eased himself back into training with a lightweight, semi-automatic gun, and muscle memory soon began to return. Mick is now gradually returning to his 12 gauge gun, and developing his trap shooting style.
Mick principally trains at Dartford shooting ground, which means a lot of travelling but the team there is invaluable to Mick, helping him with training and event preparation.  In January 2018, Mick competed in the Malaga Clay GP, which this year featured Para-clay classes for disabled shooters for the first time and was very pleased with his performance. He also took part in a club shoot in early February at Fletching, and came joint first in class with 43/60, against able-bodied shooters. He then shot two new personal best scores in trap shooting at Dartford: 22/25 and 25/27.
Mick intends to participate in two or three national opens and one European competition in 2018 and also has his sights set on the Para shooting cup in Italy in October. He is passionate about helping other disabled people get into sports and works with amputee charity Limbpower and stroke survivors charity Different Strokes.
Mick comments: “More and more disabled shooters are competing across Europe, which is fantastic progress for the sport. The aim is - and has been for over ten years - to get Para-clay shooting included in the Paralympics. Sadly this has taken a setback this week with the IPC still not allowing the sport to take part in trials at Paralympic level. This action has boosted the cause to a higher level, with many more countries pledging to send para shooters to international events to show support for inclusion. I am dedicated to helping people rediscover their passion for sport or to discover it for the first time after they become disabled. With the help of my sponsors, including TR Fastenings, I am able to pursue my passion for shooting and aim high in everything I do, and I am very grateful for the ongoing support.”
Geoff Budd, European Managing Director for TR Fastenings, adds: “To get into sport at such a high level after a debilitating stroke is one thing, but to commit to retraining after breaking his arm is another, and we are immensely proud of the determination that Mick has shown in returning to competitive shooting this year. At TR we are passionate about supporting local talent and enabling people to dig in and achieve the very best they can, and we are thrilled to be supporting Mick in his ongoing sporting journey.”
Published 26.04.18

Uckfield based TR Fastenings is pleased to be sponsoring champion shooter and disabled sports person Mick Kirby, in clay pigeon shooting competitions across the UK and internationally during 2015/16. Despite a serious stroke 8 years ago, Mick now aged 56, never regained practical use of his left arm but this did not deter him from re-igniting his passion for shooting and achieving competitive success. 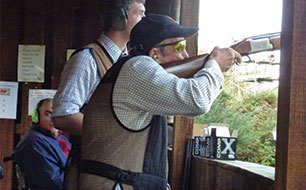 Naturally left-handed, Mick had to retrain to shoot with his right arm and with sheer determination he overcame his physical setback and now shoots competitively nationally, and has shot in Italy and hopes to compete in the USA next year. Mick has chosen not to have any allowances made for speed in competitions, despite being a fraction slower than other shots and has gone on to win first, second and third places against able-bodied shots in Class C competitions.
His new adventure began after he contacted Sportability in 2009, a charity that provides sport and challenging pursuits for people with paralysis. Mick said, “I am so grateful to the charity for helping me to access different physical activities and giving me the confidence to return to participative sport. Thank you also to Disabled Clay Target Shooting GB for enabling me to pursue my love of skeet shooting.”
David Heard, Chief Executive of Sportability, commented; “When Mick Kirby came to the first Sportability shooting event he was hesitant and perhaps even a bit reluctant to be involved.  Having had a stroke and being left partially paralysed his apprehension was easy to understand. However, with some adjustments to his stance and some support he was able to not only shoot, but found he was actually quite good at it.  This was the beginning of a whole new adventure. Mick now shoots in competitions throughout the UK and even Europe and has become a champion shooter.  He has vividly demonstrated taking the 'dis' out of disability and become a formidable sports person.  We are proud to be associated with Mick.”
Geoff Budd, TR’s Managing Director also commented: “Mick is a true inspiration and TR is delighted to be supporting such a talented and resilient individual.  His positivity and achievements are a lesson to all of us that nothing is impossible if you put your mind to it. We wish him continued success.”

"Mick Kirby has attended many Sportabilty events over the years including quad biking, archery, water skiing, rifle shooting and flying he has always found a way to take part and never refused chance to try something. The first time he came to Purbeck Shooting School to do clay pigeon shooting he told me he was unsure on how he would get on. Needless to say within the first few shots he was hitting clays and the next I heard from him was he had joined local gun club on got his own shot gun! Mick will often come along to Purbeck Shooting School when Sportabilty is having an event there as an ambassador for the sport, showing others it can be done." Tim Worner Dorset & Hants Area Organiser for Sportabilty
“Mick Kirby was recommended to British Shooting as someone with a passion not only for his own shooting, but as someone with an ability to inspire and enthuse others. We are currently looking to increase the number of disabled people participating in the sport and with more people like Mick our job would be a lot easier. He has helped us not only to deliver activities to new people, but to share his ideas as to how disabled shooting can go from strength to strength, several of which we are currently following up on.”  Liz Davidson, National Development Manager, British Shooting
For more information or to request a press pack, contact TR Marketing: marketing@trfastenings.com